"Nowhere will you find people of robuster physique, higher spirited, or longer lived, more active in their old age and later in reaching it, than among the Highlanders; and that in spite of their entire dependence on cheese, flesh and milk. In the variety and delicate flavour of our meat we can bear comparison with the greatest countries."

I do not suggest we ditch plant food and load up on dairy & meat. Please try to look at “Highlanders diet” from a higher perspective. I personally eat half of my food by volume in form of vegetables and 90% plant-based. If I choose meat and dairy, it’s usually local, home-made, leftover bones (aimed for pet food, here in the UK) or at least organic. My worst health problems always followed after periods of vegan or vegetarian diets. I respect all living creatures and do not differentiate between a fluffy dog, a cow, a toilet spider or various meadow creatures (by the way, they do get destroyed by creating vast fields of wheat, soy, corn…).


This beautiful area of Perthshire around Killicrankie, Blair Atholl and Loch Moraig took my breath away. Again, during my recent visit as well as first time, in 1995. I keep wondering all these years, why no-one lives up at those green glens anymore, why are they so empty?

The only creatures met, among abandoned ruined settlements, some almost buried under the thick grass, were numerous sheep and wildlife. Why did people had to leave this beautiful place of prehistoric Sithean cairns and dolmens, and never came back? How did they live, survived harsh weather, and what was their diet? I never indulged in history much and could never remember all dates, battles and names in school to like this subject. But coming from a science of nutrition and importance of genetic connection to ancestors, these are questions I’m starting to ask. I’d also like to see if coming back to original diet could be an answer for some of my clients with Gaelic ancestry?

My search revealed that people of Highlands and Islands of Scotland lived mostly on diet of meat, fresh raw milk and various milk products, accompanied by only very small amount of grain products, mostly oats. Vegetable was eaten less but fresh, depending on season, with green leafy veg such as kale (kail) mentioned often as successful crop. Fresh wild bilberries and cranberries would be freely available on heathlands and would be eaten fresh and also preserved. A specialty such as mysterious “intoxicating” fermented whey & herb drink Blandium, fish, wild rabbit or hare, various game would be on their menu too, at least at some points in space & time and probably more so during times of feasts.


Farming of grains is an unpleasant matter. Damp and cooler weather of the Scottish Highlands causes increased mould growth, either during growing, drying or storage of grains. Such grain can become dangerous to consume due to mycotoxins produced by Fusarium fungus (Ear Blight). Highlanders who wanted to grow their own crops, had to build special barns, opened on two far ends to protect harvest from damp and create an air flow. It seems while Lowlanders grew also wheat, peas and flax, Highlanders had only wild oats and barley. They would make oat cakes or barley flat breads to accompany meat or dairy but the main use of grains was for animals and brewing.

Corn was only grown as green food for their cattle, which was partly fermented in silage, for winter feed. This would make animals healthier and quality of milk and meat higher. Grain was never a main part of Highlanders diet as it is in Scotland today, where literally every meal contains wheat and flour in one form or another.

Flax plants were possibly grown here in more recent history as shown by the remains of retting pools for linen processing, but there is no evidence of other use of flax, such as for oil or meal.


Highlanders were strongly relying on fresh raw dairy to consume enough nutrition needed for health. Unlike today, milk was neither pasteurised nor homogenised and therefore retained some specific nutrients such as heat-sensitive enzymes (important for digestion) and immune cells. Two cups of raw milk would have enough of daily amount of iron, vitamin A, vitamin K and calcium, and also good amount of folate, magnesium and also vitamin C.

Scottish ancestors would be good “lactose tolerators” and “lactose absorbers”. This meant majority of people could utilise this milk sugar efficiently and without side effects such as flatulence or stomach cramps. Lactose and casein in milk is thought to assist with calcium absorption, which (only for lactose tolerators & absorbers!) would compensate for less sunshine during colder months and less need of mineral-utilising vitamin D. There would be more healthy kids with these genetic attributes and those without them would either not survive long or reproduce successfully.

Farming of cows or goats and selling them (or their products) to southern parts of the UK would have been be the main means of making money for most Gaelic families in 15.-18th centuries. One cow was always kept near the house, all year round, for milking. Milk was therefore plentiful and very fresh. It was used to make butter, cream, whey products, cottage cheese and hard cheeses. As cows were grazing on green grass for a good part of a year, milk would have much better ratio of omega-3 fats, immune boosting cells and more vitamins and minerals we can dream of today, to receive from any type of shop-bought milk.

When making cheese, there is lots of whey liquid left over at the first stage of cheese making, which involves natural curdling and squeezing the curds dry. Some of this fermented (sour) whey would be drunk straight up, some probably given to animals and some was processed further to mysterious liquor Blandium. There is a historical record about special way of churning a warmed up whey liquid with a “machine with stiff hairs” so it would become frothy, named Frau, possibly from Froth. Drinking of whey liquid seemed to have a ritualistic character in old Scotland. It is possible this ritual was making sure, all members of family or farming community, took the beneficial drink to ensure their health.


While young female cows were always kept for milk, male bulls or calves would provide source of meat. However, most cattle were bred as a currency to be sold for English markets and typical Highland family would not have meat or beef daily. But visitors would always be offered “flesh” by a family, to show their best hospitality. Additional sources of meat would be available, at least for some, in form of fish, deer, wild rabbit, hare, pigeons, various heathland birds and also goats. Later in history, breeding of wool-bearing sheep would take-over in Highlands on request from English markets and mutton would possibly become more common on their menu.

We cannot forget to mention, that offal was eaten and considered very good for health. Broth soup would be cooked from bones and some harder parts of meat and offal. Whole animal would be well used, including blood which was mixed into a haggis (taigeis), blood pudding or sausage (marag). Skins would also be used for leather and many would be sold to English markets.

From flesh to fairies


Interesting coincidence with Gaelic words mhargadh (market), local settlement Markdow of Clune, word marag (sausage) and near-by Loch Moraig has been noted while researching for this subject. Cua-mhargadh is thought to be an old name for flesh-market. To my surprise, even word sidheann, with widely accepted meaning as “she-fairy” (and in form of Sithean - a name of local prehistoric cairn only few hundred meters from Markdow settlement), has also been given meaning of “venison”. Similarly word sithionn has meaning of flesh of rabbits, hare or poultry. In my opinion this word could simply mean something soft, fine or tender, such is a “woman-shi” or “fairy” quality.

Another line of thoughts about this meaning comes from Latin origin of venison: venari = to hunt, to pursue. Fairies could have been mysterious beings residing here, hunted or pursued (chased away) at some point in history. Translation of sitheann (and similarly spelled words) would therefore be, in my opinion, "shy, timid, easily chased away".  Not unlike the people and way of life in Highlands, lost over the past centuries due insensitivity of other interests.


The area of Scotland commencing at Loch Tay through Blair Atholl, Loch Moraig and further into north-east direction has a unique occurrence of geological layers of Dalradian metamorphic (crystalline) limestone, amongst more typical layers of schists. Through these rocks the water flows many kilometres along the faults and takes on new quality before it emerges in the mountain springs. Unlike most other places in Scotland, where water comes from surface reservoirs, or running through deep peat bogs and becoming slightly acidic, mountain springs in this area have still some calcium and magnesium ions to keep water slightly alkaline at about pH 7.6. My measurement of dissolved units of local spring was 80 TDS, 3-4x higher than usual tap water in other parts of Scotland. On the other hand, water would not be as hard as in non-crystalline limestone areas, where TDS could reach up to 300 units. Easily dissolved limestone causes hard water and can wreak havoc not only in your washing machine but also by excess calcification of body tissues.

Having all-year round high quality source of water would be another advantage of these mountain settlements and would help to keep their people healthy.

“The population was high, but reports of famine and sickness were uncommon outside of times of general troubles, for example the famine years of the 1690s, which were widespread throughout Scotland, and were a result of adverse climatic conditions…”

“… None of the travelers in Scotland speak of endemic starvation or acute emaciation among the population. The Highlanders exchanged their excess dairy produce for the Lowlanders' meal... The regular consumption of fresh animal meat, on the other hand, was probably restricted to the husbandman and some Highland crofters… (Smout 1970, 153). The idea, however, that this area produced, or imported, vast quantities of grain, is unlikely. The grain that was produced and imported was mainly used for brewing or animal fodder and the Highlanders who exchanged their dairy produce lived close to towns.”

Popular posts from this blog 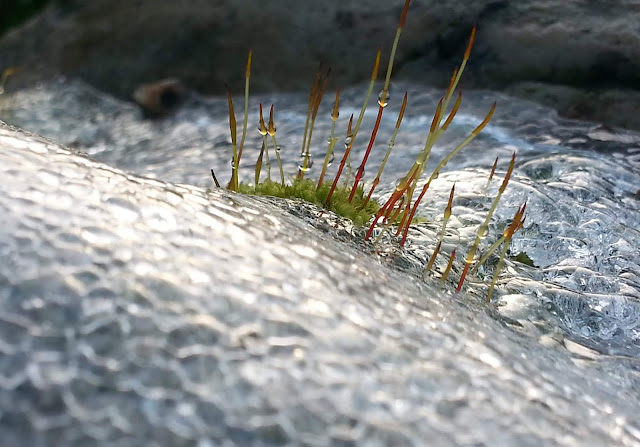 A very happy and healthy new year to all! Two-bus journey away from the busy Central Belt of Scotland. What a treat! Photos taken by my second-hand £80 smartphone. Location: Pitlochry, the Hill above the Lettoch Farm and the river Garry. Walk difficulty: easy enough but all paths can be dangerous when frozen. Walks can be adjusted to take 2-4 hours.
Read more 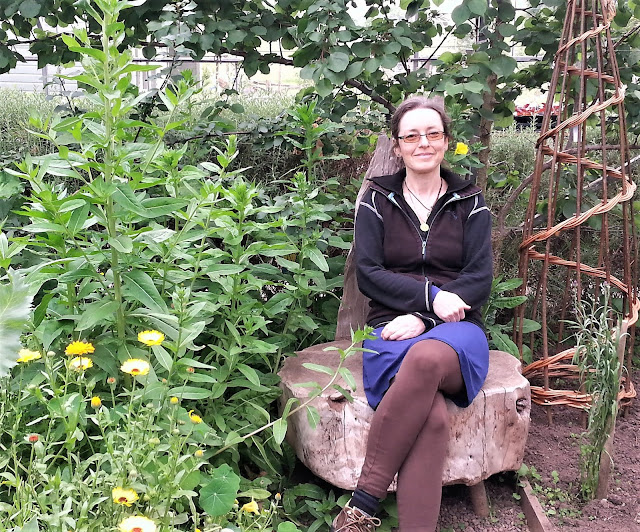 Feeling oneness with all life around .... early Summer walks. The above photos are from "real" Secret Herb Garden here in Edinburgh. Great walk along the relatively quiet road (avoid traffic hour and Fridays!), walking from the foot of Pentlands at Hillend towards Ikea. By the way, we did return to Secret Herb Garden in November and had some of their lovely kale leftovers (in form of garlic-kale chips, they were fantastic, never mind healthy)! Below is my own secret miniature garden and few radishes before the slugs had chance to feast on them all. Another walk along the Union Canal to the Ratho Climbing Centre and those amazingly blue poppy flowers and sudden torrential rain were taken in the Edinburgh Botanic Garden. JOIN ME!
Read more